Inspiring Geometric Tattoos For Your Body

Geometric tattoos are tattoo designs that have some geometric patterns involved.

These patterns can stand alone or be connected with other elements. The most popular combinations are patterns with animals or flowers. But the variety of styles is actually huge.

What’s also important to mention is that such tattoo designs often denote something significant to a person having one. Their meanings are quite profound.

A Human Is A Part Of Nature 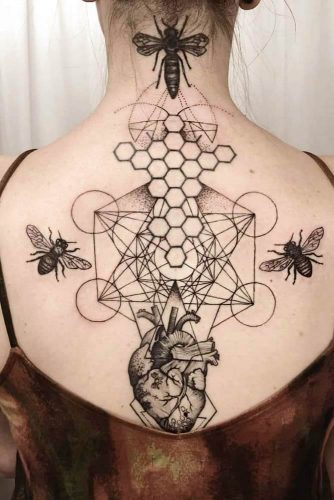 This tattoo is intricate and expressive. The heart represents a human, the bees are nature. And a human is connected with all the nature in ways people still cannot understand entirely. 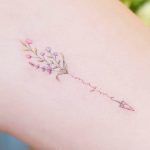 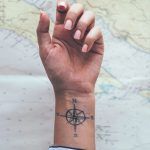 A Guide To Compass Tattoo With Cool Design Ideas 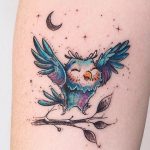 24 Owl Tattoo Designs That Will Make You Drool With Satisfaction 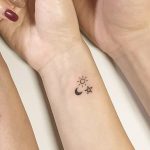 Butterfly Under The Sun

This tattoo means that this person is a free spirit. Overall, butterflies are related to transformation, faith, and freedom. Sometimes they are also viewed as symbols of romantic love and femininity.

I Am Cute But I Can Bite 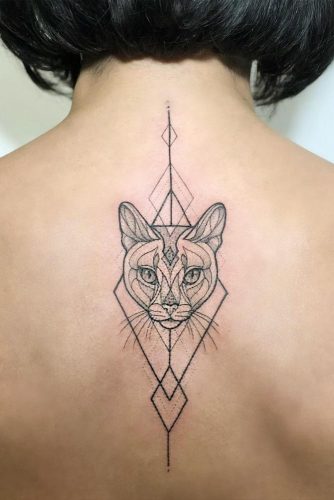 I Know My Strengths And Weaknesses 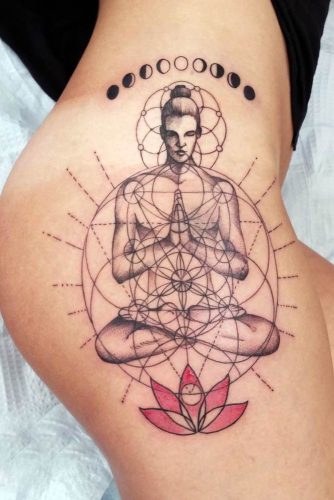 Can you see that in this tattoo, geometric patterns intertwine in specific spots? These spots are a person’s qualities, something that determines who this person is, what this person is capable of.

Complicacy Is Hidden Behind My Delicacy 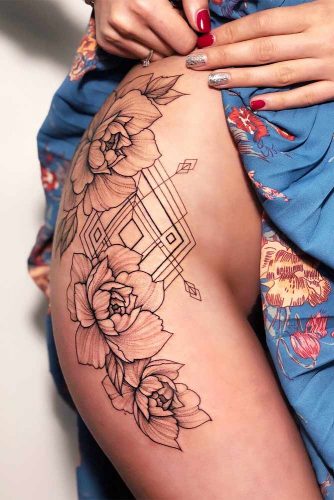 In this picture, you can notice that a geometric tattoo artist created a multi-layered tattoo. The flowers are in the foreground, they signify a person’s superficial features. And the diamond patterns are in the background, they denote a person’s true nature.

I Am An Evolutionist 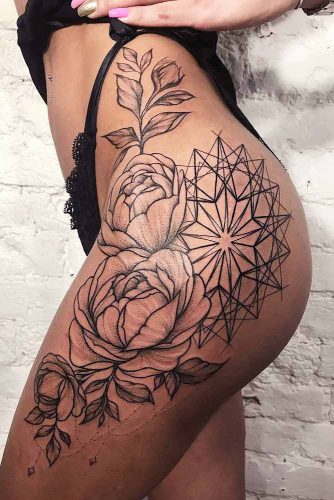 How did these amazing flowers appear on Earth? The geometric design beside these flowers looks like a big bang, the one that made it possible for the universe to emerge. It was a long evolutional journey for the nature to be as we know it today.

Flower From A Heart 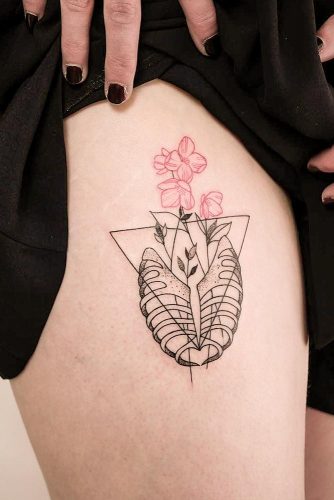 Everything is eventual, and the tattoo here depicts the idea best. Even when something bad happens, the good can arise from it, like these beautiful flowers from a decayed chest. 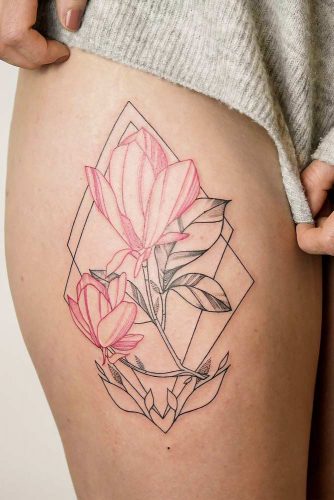 When you are opting for a flower tattoo, you need to figure out whether you want it to be single or in a couple. It may seem like something insignificant, but usually, there is much more meaning behind simple things.

Danger Can Be Beautiful 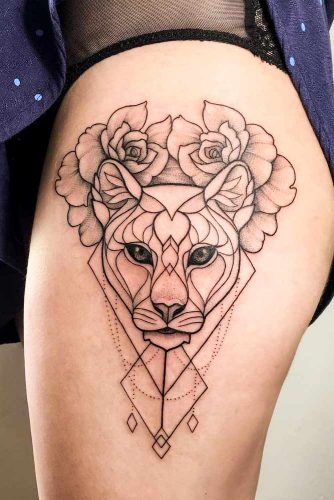 The lioness is the symbol of strength and danger. This beautiful tattoo stands for the idea that women can be not only pretty but pretty dangerous as well!

In Harmony With Myself And Nature 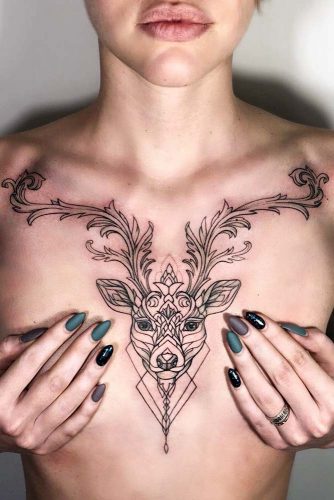 In Buddhism, a deer stands for longevity, peace, harmony, and happiness. In a lot of traditions, a deer is also associated with gentleness, kindness, and softness. This animal is often seen as something sacred, related to gods.

My Faith Is Strong 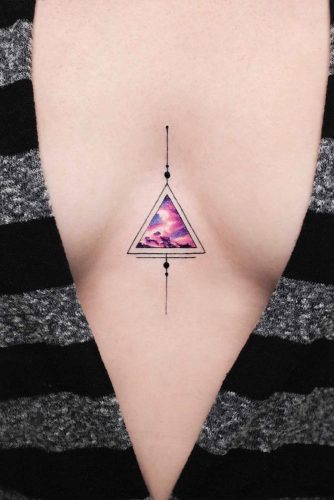 A triangle consists of 3 sides, and it often signifies Christianity – Father, Jesus the Son and the Holy Ghost. Other popular meanings involve:

And numerologists view 3 as a number with mystical powers. 1 is some force, 2 is an opening, and 3 is the wisdom resulted from the combination of 1 and 2.

I Can Look Below The Surface 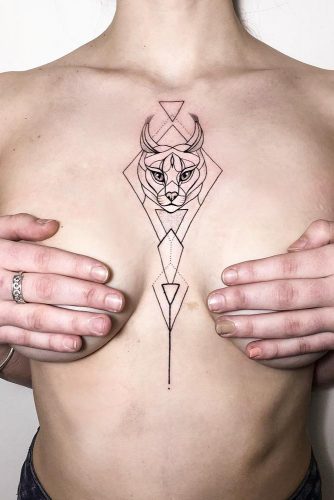 A lynx is a symbolic animal. It is believed to possess some second sight abilities, to see through objects. This animal hears other creature’s thoughts through some kind of vibrational energy.

I Know The Mysteries Of Life 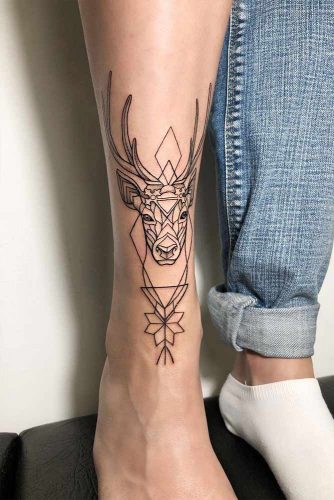 A deer with geometric shapes is among the most popular geometric tattoos. Maybe it’s because a deer has many positive meanings, and we really can’t think about any negative ones. As a totem animal, the deer is believed to have intuitive powers.

Thank You, My Sun, For Making Me Bloom 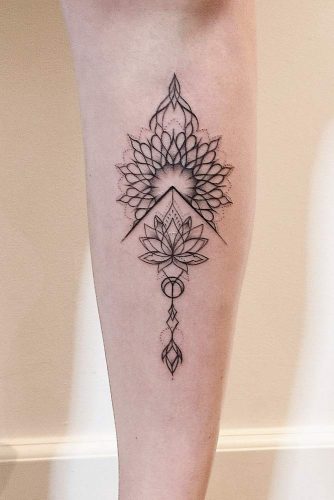 Women often choose delicate geometric tattoos because they look pretty and feminine. This tattoo is devoted to this woman’s love of her life with the sun referred to this person.

Connected To This Universe 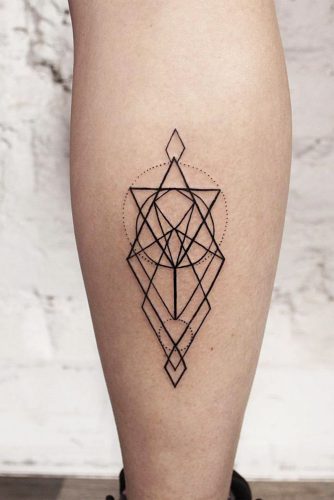 Few rules of this universe are known. Maybe that’s why in art it is often depicted as something as intricate and controversial as this geometric tattoo. It looks enchanting, how do you think? 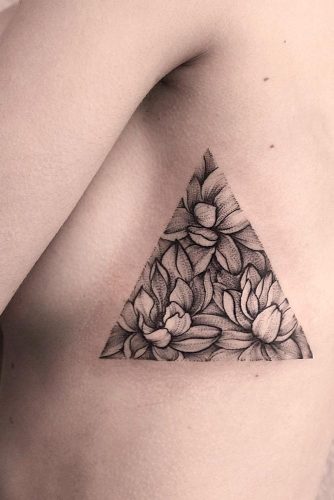 This black and white tattoo looks feminine and really soft. And it’s an interesting choice to depict flowers and then cut the design with acute lines of the triangle. This tattoo looks fab on this model’s side.

My Soul Lives In All Dimensions 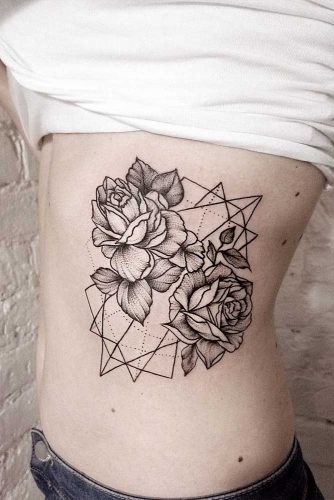 Many geometric tattoos depict the multitude of dimensions. In this tattoo design, the roses spread all over the multi-dimensional universe. This person may believe in having twins in other worlds. 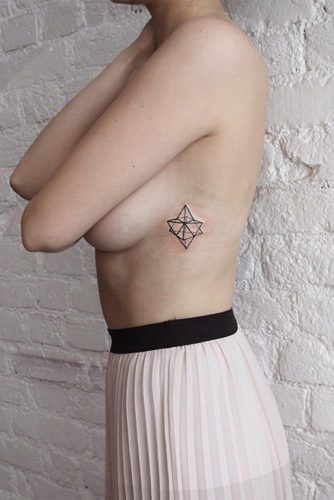 The Space Triggers My Decisions 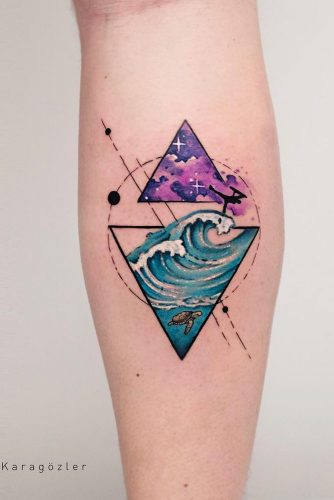 Do you know that the rise and the fall of the tide depend on the forces of gravitation exerted by the Moon and the Sun? That’s what this tattoo represents with the space depicted on top and the ocean below.

There’s Fantasy Trapped Inside This Body 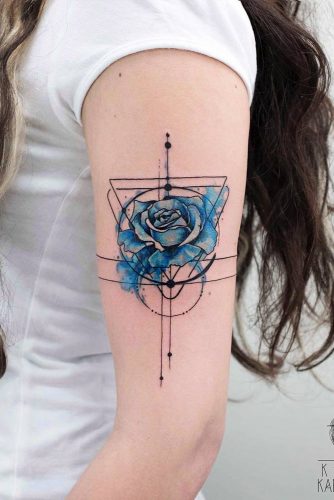 This flower design is not only pretty but also meaningful. A blue rose means fantasy, the impossible, or the unattainable. Here the rose is inside a triangle, which represents some kind of a vessel, probably this model’s body.

Classics Is My Thing

Geometric tattoos will never lose their popularity, they are truly timeless. Just think about it, geometric figures have existed for thousands of years. And people still admire them. Look at this picturesque tattoo, how one can doubt its beauty? 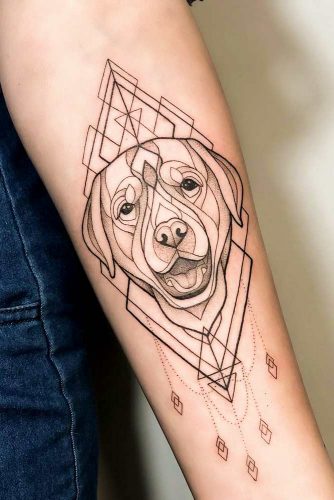 Very often tattoos are beyond belief symbolical. It is a known fact that a dog is the best fiends of every human being, however, the depiction of a dog as a tattoo may symbolize loyalty and devotion aside from strong friendship. 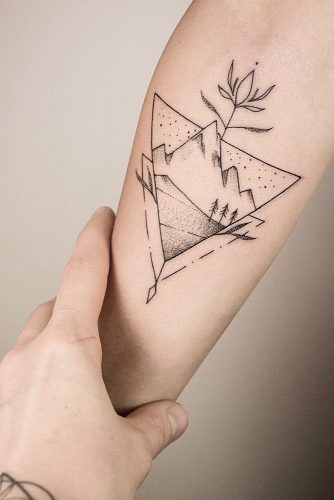 Nature gives us life, and we are bound to celebrate it instead of destroying it. The endless circle of life is worthy of being depicted as a skillful geometric tattoo.

Beauty Is In Simplicity 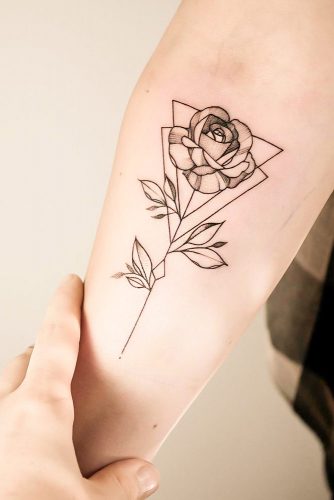 Flowers usually bear much more meaning than we can imagine that is why when you are choosing your next tattoo to be careful with what you pick! Rose here stands for love, and it does not matter whether a man or a woman wears it.

Geometric tattoos are all the rage today, and we hope that you enjoy this photo gallery. Explore more curious topics on our blog. We are on guard of all the trends to share the info with you.

A Cat Tattoos Guide To Help You Choose

How To Choose The Perfect Tattoo Placement 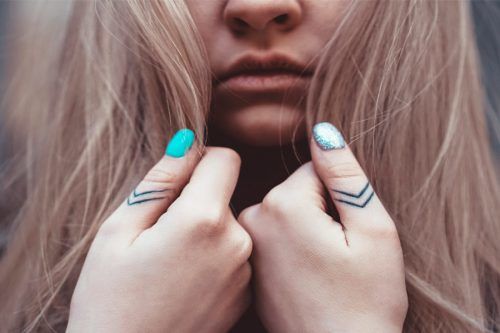